Traditional approaches to toxicity testing have posed multiple challenges for evaluating the safety of industrial and environmental chemicals, pesticides, food additives, food contaminants, and medical products. The challenges include the number of chemicals that need testing, time and resources required for traditional testing, and the unexpected adverse effects that can still occur in clinical trials for drugs despite the extensive toxicological testing.

Over a decade ago, the U.S. Environmental Protection Agency (EPA), National Toxicology Program (NTP) headquartered at the National Institute of Environmental Health Sciences (NIEHS), National Center for Advancing Translational Sciences (NCATS), and Food and Drug Administration (FDA) formed the Tox21 Consortium. Tox21 is a US federal research collaboration focused on driving the evolution of Toxicology in the 21st Century by developing methods to rapidly and efficiently evaluate the safety of commercial chemicals, pesticides, food additives/contaminants, and medical products.

goals of the tox21 program Tox21 Memorandum of Understanding

Since Tox21’s inception in 2008, the collaborative research team has developed and validated in vitro cell-based assays (tests) using quantitative high-throughput screening. The researchers have identified, developed, optimized and screened more than 70 assays. The Tox21 program includes three research phases, structured with guidance from several reports including Toxicology in the 21st Century: The Role of the National Toxicology Program, Toxicity Testing in the 21st Century: A Vision and a Strategy

, and The US Federal Tox21 Program: A Strategic and Operational Plan for Coninued Leadership 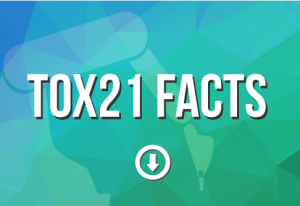 Throughout their lives, people are exposed to thousands of chemicals in food, household cleaning products, medicines and the environment. However, scientists know little about the potential for most of these substances to be hazardous to human health (i.e., their toxicity). In fact, more than 30 percent of promising pharmaceuticals have failed in human clinical trials because they are determined to be toxic, despite promising pre-clinical studies in animal models. New methods to assess chemical toxicity have the potential to improve how scientists evaluate environmental chemicals and develop new medicines.